In an effort to bring awareness to the issue of racism in an online gaming environment and to fight these issues, Infinity Ward has made a promise to it’s community, and has implemented a very clear message that appears before you log in to Call of Duty,

“Our community is hurting. The systematic inequalities our community experiences are once again center stage. Call of Duty and Infinity Ward stand for equality and inclusion. We stand against the racism and injustice our Black community endures. Until changes happen and Black Lives Matter, we will never truly be the community we strive to be.”

In conjunction with this, Infinity Ward posted a very clear message on social media regarding how they plan to turn up the heat on how they deal with the issue of racism on their platform in the near future. 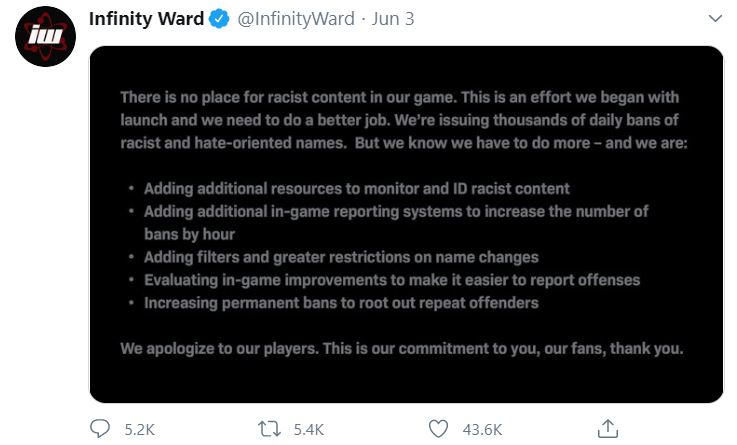 How effective this will be remains to be seen, but it’s good to see a publisher actually outline a way they are trying to help their community.  Many other games or platforms have had timed “black outs” of their services to bring awareness, some like Fortnite even going as far as to delay content that was supposed to be released to bring awareness.  However, as a lot of these movements aren’t accompanied by further action, it’s hard to feel like some, if not most of these, are PR reactions.   In a world where a lot of lip service is given by companies to “be part of the movement”, hopefully more publishers will step up and actually DO something, even if it’s small, rather than just talk.

It’s would be nice to see more online environments crack down on their censors regarding racist and homophobic slurs.  For instance, on Rocket League, you can still type the N-word , or call someone a “f*g” simply by using a ǵ instead of g, but the words “2ez” are banned because it can be seen as bullying. I know this, because I’ve been called both of these things over the last week while playing online. Never mind the things people have said to me playing Smite or League of Legends via text in the last year.  Censor oversights like this exist in so many games that it’s kind of embarrassing.  There is a lot of work to do to create a more inclusive online environment, as it’s very hard to monitor and control every interaction that happens.  However, if companies take more control over the pieces they CAN control to help curb hate speech, at least some progress can be made.